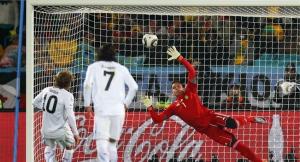 Whole Africa is celebrating, they can see all their stars in action. It’s a big event for all African nations, specially South Africa (RSA). Local support for home team is enormous. People cheer them up, every time they run towards opponent’s goal. But the poor performance by RSA team was not worth the efforts supporters are making. They were playing like a newbie. The ball looked in no mood to stick to their shoes. They were loosing possession to Uruguay players as soon as they were coming inside their half. Uruguay too was in no mood to take the opponent lightly. Even though Uruguay is no football champion but they managed to kill RSA by 3-0.
Overall, the match was a pain to eyes.